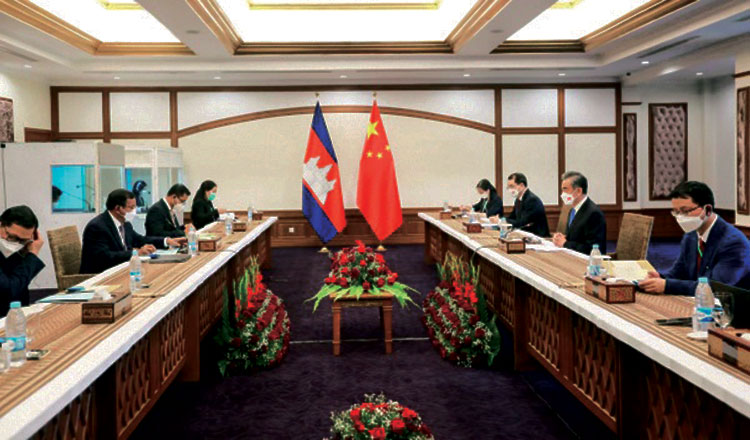 “China, as a close strategic partner, will continue to stand firmly with Cambodia and support its political stability and economic development,” Wang said.

During the meeting, the two sides praised their comprehensive cooperation, vowing to continue pushing for further cooperation.

They also agreed to continue cooperation in several areas, including agriculture, environmental protection, technology, and cultural and people-to-people exchanges.

Cambodia and China are good trading partners in bilateral, regional and global trade, with bilateral trade volume increasing every year, said Sok Sopheak, state secretary at the Ministry of Commerce.

Cambodian exports to China have increased in value by 6 to 10 percent on average every year, he said.

“The increase in exchanges is due to the good cooperation between Cambodia and China in all fields and at all levels,” Sopheak said.

“The mutually beneficial cooperation in the agricultural sector of the two countries has been a new practical achievement, reflecting the strong resilience and mutual complementary economic and trade cooperation between the two countries, becoming an important part and vital source of economic recovery and growth in the region. Wang said at a forum on economic diplomacy in the new normal last week.

Following imports of Cambodian agricultural products, including bananas and mangoes, into the Chinese market, the Kingdom’s “Pra” fish export is expected to officially complete procedures in the near future, he said.

In the first five months of this year, bilateral trade between Cambodia and China reached 4,990 million dollars, an increase of 26.1 percent over last year, according to data from the General Department of Customs. and excise.

“Regional economic growth key to the development of Southeast Asia”