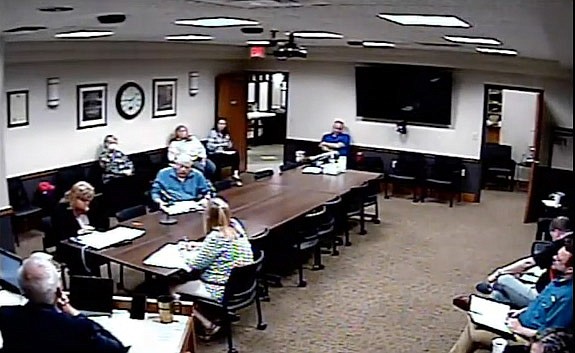 The Cole County Commission on Tuesday signed a contract with the Jefferson City Regional Economic Partnership to continue working on economic development in the county.

The commissioners voted unanimously for the contract, but not before hearing concerns from Ed Williams, a former commission nominee.

Williams took the commissioners to task, saying their support for the deal only supported people “who are not in contact with the citizens of the county”.

Previous commissions had approved all three proposals when they were before voters.

“If citizens were allowed to vote to give money to the chamber, it would be immediately crushed,” Williams told the commissioners. “Cole County’s unemployment rate is about 1.9%. With such a low rate, who would want to come here to build a factory when there aren’t enough workers?”

The county contracts with JCREP to provide economic development services. The county pays JCREP $120,000 under an annual contract. Jefferson City also has a contract with JCREP for similar services; he pays $185,000 a year.

Prior to hiring JCREP for these services, the county entered into a contract with the Jefferson Area Chamber of Commerce. But in 2021, the chamber stopped providing these services so that it could serve its member companies. A separate entity, JCREP, was created to recruit new businesses or industries into the community offering a more regional economic development approach. JCREP relies on a combination of private and public funding sources.

The county contracted with JCREP to “assign staff for the sole purpose of new business development and such staff will aggressively pursue new business and assist developers in attracting new business for all of Cole County.”

In a report to the commission last week, JCREP executive director Luke Holtschneider said their current goals were broadband expansion as well as aiding in the development of a port on the Missouri River and redevelopment. of the Missouri State Penitentiary.

When commissioners told Williams the deal they were discussing Tuesday was not a vote for the chamber, Williams replied, “Hog Wash. It’s still the same people.”

“The chamber knows it doesn’t need money to attract new jobs, it needs money to give to its members,” Williams added. “Giving tax breaks to companies like Striker for 25 years is unfair to citizens who pay their taxes.”

Williams was referring to a Jefferson City Council vote last month that authorized a development agreement and partial tax abatement for the 2017 redevelopment of Christy Drive, where the old Capitol Bowl stood before it was demolished due to damage. by a tornado. In its place, DGVGB LLC developed Striker’s Grill & Tornado Alley as an entertainment center featuring bowling, video games, pool tables, an arcade, restaurant and bar.

“Twenty-five is ridiculous and not even realistic,” Williams said. “It was called seed capital. It’s a bit late for seed capital when it’s already built and ready to open.”

Williams told commissioners they should require JCREP officials to have something printed out each quarter for all residents to see, rather than simply allowing a presentation to the commission as a report.

Before the commissioners voted on the contract and the quarterly payment, Williams asked them to tell him why they would vote for it and to “do the right thing and not give them that money.”

“I live on a road (Shepherd Hills Road) that I’d like to see paved, and there’s been tremendous growth there,” Williams said. “We tried and tried to get it fully paved, and that’s where that money should go.”

Presiding Commissioner Sam Bushman said many of the cases cited by Williams, such as the Striker downsizing, were city, not county, issues.

Williams replied, “You’re giving these people money and empowering them to stand up for these things. If you think you can convince me that this (JCREP) isn’t the chamber, you’re wasting your time.”

A second component of the county’s economic development strategy is devoted to lobbying efforts on behalf of the county. In October, the commission hired RJ Scherr & Associates of Jefferson City as a lobbyist for the county. The contract calls for lobbyists to provide the county with regular updates during the legislative session and to inform the commissioners of any regulatory issues that may be of interest to the commission.

In another action on Tuesday, the commissioners awarded a contract for storm water improvements on Darby Place Road.

The project includes the addition of a pipe to treat runoff from a lot that exits to the road. The pipe will be connected to the existing storm water system in the subdivision.

GWH Landscape Contracting LLC was the lowest apparent bid at $37,624. The engineer’s estimate was $74,833. The commissioners asked if public works staff did more checking when the difference between the estimate and the offer was substantial, as was the case here.

Public Works Manager Eric Landwehr said yes and also noted that they had worked with GWH on another project and had no problems with their work.

In other cases, Landwehr told commissioners that a pipe had collapsed at Thoenen Park on South Brooks Drive and they had installed temporary fencing around the affected area. He said they should close the park when repairs begin and until they are complete.

Watch the video of the meeting at https://www.youtube.com/watch?v=vFGymZKskmU.