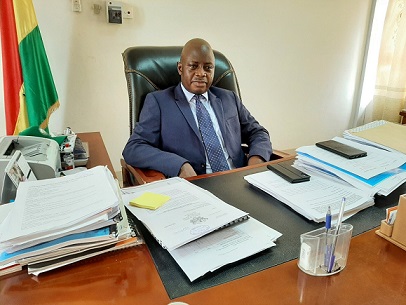 Upper East Regional Minister Stephen Yakubu said the poor attitude towards work, especially those in the public sector, has been the bane of sustainable economic development in the region.

He said “delays, absenteeism and bureaucracy” on the part of workers have led to little to harness the potential of the region’s many natural resources.

The phenomenon has also led to the collapse of many industries created to improve the livelihoods of the people, especially the meat factories in Zuarungu and the tomato factories in Pwalugu.

“Let us use our material and human resources to redress the situation in the region with resources as important as the Tono, Vea, Tamne and Pwalugu dams to come. These resources have the capacity to feed the whole nation and even to export,” he added.

The Regional Minister made these observations in Bolgatanga, the Regional Capital, during the celebration of May Day, organized by the Congress of Trade Unions

The Regional Minister said that despite the many challenges facing the region, it was important for workers to help leverage the various market opportunities offered by the African Continental Free Trade Area (AfCFTA) to add value to the its resources in order to create jobs and increase incomes.

“I fervently hope that having realized our mistakes, we are now in a better position to change our attitudes to ensure that current policies do not suffer the same fate. My administration will carry out monitoring visits to all government institutions to ensure that workers are working to justify the wages they receive,” he noted.

He said the government is aware of the economic hardships affecting the people of Ghana, especially the workers, but it is imperative that the labor front avoid negative behaviors to help bring the economy back to its normal state.

Mr. Yakubu noted that government flagship programs such as One District One Factory, Planting for Food and Jobs and Planting for Export and Rural Development, among others, could not be successfully implemented to produce the necessary results if the workers do not support the government to increase the necessary income. .

He said: ‘I urge you to cooperate with the government as it rolls out these new policies which include but are not limited to electronic levies and budget cuts.

Mr Augustine Adongo, TUC Upper East Regional Secretary, who read a speech on behalf of Dr Anthony Yaw Baah, TUC General Secretary, called on the government to improve the conditions of service of workers for harmony and industrial productivity.

The celebration themed “Promoting Jobs and Incomes in the Age of the COVID-19 Pandemic and Beyond” was characterized by a march through the streets of Bolgatanga Township by trade unions.
Twelve of the different unions received awards for their outstanding performance in their area of ​​work.

Send your news to newsghana101@gmail.com and via WhatsApp to +233 244244807
To follow Ghana News on Google News
Share FacebookTwitterGoogle+ReddItWhatsAppPinterestEmail

Inflation climbs to 29.8% in April