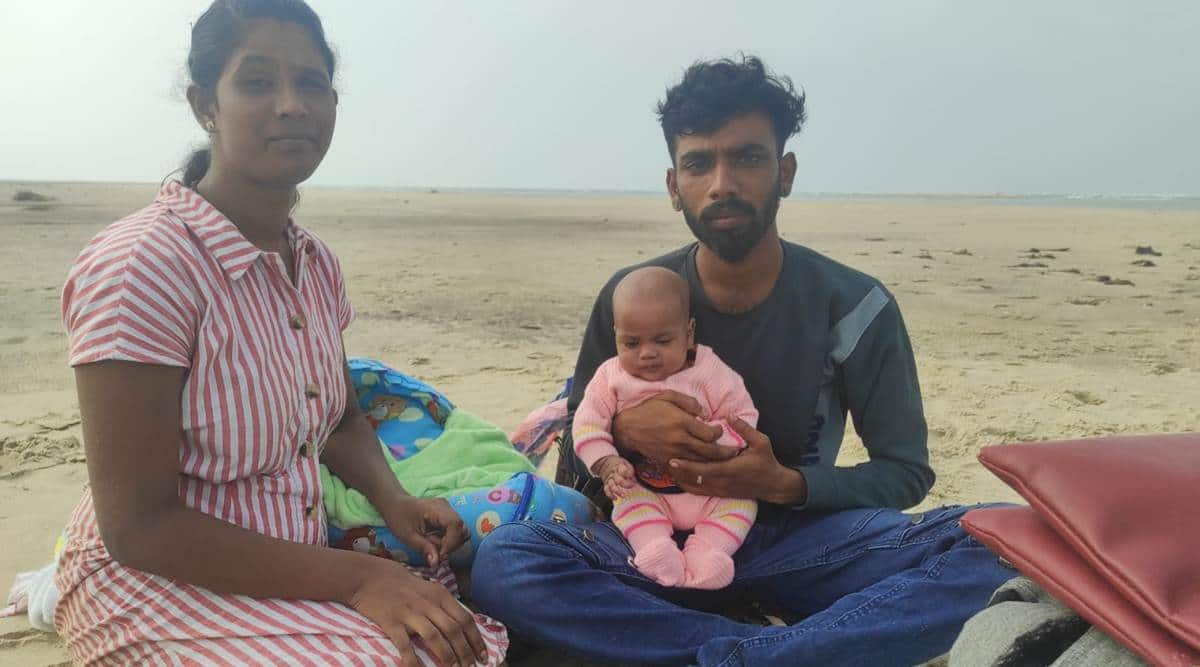 The repercussions of the Sri Lankan economic crisis are now being felt on the Indian coasts.

On Tuesday, 16 Sri Lankan nationals, all Tamils ​​from Jaffna and Mannar regions in the north, reached Tamil Nadu in two groups. The first set of six refugees, including three children, were stranded near an island off Rameswaram and rescued by the Coast Guard. The second group of ten arrived late at night.

Tamil Nadu police sources told The Indian Express that the refugees were fleeing unemployment and food shortages in Sri Lanka. And reports from the Tamil-dominated northern areas of Lanka indicate that this may just be the beginning. Tamil Nadu intelligence agents have obtained information that “about 2,000 refugees” are expected to arrive in the coming weeks.

The six refugees in the first group include a young couple and their four-month-old son, as well as another woman and her two children. Local officials verified their identity: Gajendran (24), his wife Mary Clarine (22) and their son Nijath (4 months); and Tiori Anistan (28) and her children Moses (6) and Esther (9).

The identities of the second group, which includes three women and five children, are being verified.
“The six refugees in the first group told the police that they had been forced to flee after struggling for several weeks for food. They claimed to have paid around 50,000 rupees to the fishermen who dropped them on the fourth island off Arichal Munai in Indian waters. According to them, many more families are finding ways to flee to India due to the severe shortage of food and fuel and lack of income,” an official said.

“They were rescued on a hovercraft, and fed at the coastguard camp, before being handed over to the police. Police said they were all transferred to Mandapam refugee camp near Rameswaram,” the official said.

“The second group arrived on a fiber boat. They left the Mannar coast last night and claim to have spent a total of Rs 3 lakh on the trip. The boat had developed a technical problem en route and they had to spend most of the day fixing it in the open sea before reaching near Pamban Bridge in Rameswaram around 9pm,” the official said.

Speaking to The Indian Express, Mannar-based activist VS Sivakaran warned it could be the start of an exodus.

“Many people I know are considering leaving Sri Lanka, some have relatives in Indian camps, others have contacts in Tamil Nadu. There is panic and anxiety about tomorrow. It is almost certain that the price of rice will reach Rs (Sri Lankan) 500/kg in another week. Today, it’s Rs 290/kg of rice, Rs 290/kg of sugar and Rs 790 for 400 grams of powdered milk,” he said.

The price of powdered milk, for example, jumped by Rs 250 in the past three days, he said. Last week, he pointed out, the Sri Lankan government postponed school exams indefinitely due to a paper shortage.

Sivakaran’s assessment of an imminent exodus was underscored by Lankan government sources and local political observers, who had witnessed a similar exodus at the height of the civil war there in 1989. This exodus has ended with the end of the war in 2009. Since then, there have only been isolated cases of Lankan Tamils ​​coming to India on fishing boats.

Suresh Premachandran, who leads the political group Eelam People’s Revolutionary Liberation Front (EPRLF), said the working class is facing heat. “Construction workers and daily bets are struggling due to inflation across the country. Considering the previous exodus, the people of Mannar and Jaffna may be looking for ways to reach India. This may be the start. More people are likely to leave the country unless the economy stabilizes,” he said.

On March 17, India extended a billion dollar credit facility to Sri Lanka. A day earlier, President Gotabaya Rajapaksa said his government would work with the International Monetary Fund to overcome the crisis. Lanka has witnessed massive protests over shortages and high prices, with thousands gathering on the main road from Galle to Colombo earlier this month, some even entering the president’s office.

“We are grateful to India for its timely financial assistance. The most populated areas, such as the city of Colombo, are facing fuel and gas shortages while the northern regions and areas outside the cities are expected to be better. It is a fact that we are going through a difficult period with significantly high inflation, which is entirely linked to the dollar crisis,” he said.

“While a few sectors are badly affected, other businesses are doing well. The export industry has grown by 24 percent. Tourism, which was almost zero last year, is almost back to normal. We are bouncing back, hopefully things will be better in a week or two,” the minister said.

“The invasion wiped out economic development” – adviser to Zelenskyy