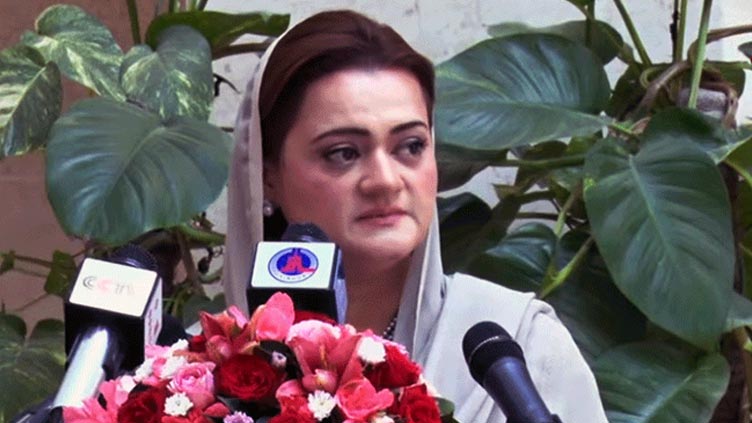 The information minister said China always considers its relations with Pakistan a priority.

ISLAMABAD (Dunya News) – Information and Broadcasting Minister Marriyum Aurangzeb visited the Chinese Embassy in Islamabad on Saturday to mark the 71st anniversary of the establishment of diplomatic relations between Pakistan and the China.

Speaking on the occasion, she said that we mark this day as a historic day.

The minister said China-Pakistan relations have not only brought economic and human development to Pakistan, but also contributed to regional prosperity.

She said that China has resisted us through thick and thin and this has helped Pakistan’s interests in all forums across the world.

Referring to the recent terrorist incident in Karachi in which three Chinese nationals were killed, the Minister said that we would bring the culprits to justice. She said the entire security infrastructure is overseen by the Prime Minister himself. The minister said CPEC projects will be accelerated.

The Minister of Information, who visited the embassy under the leadership of Prime Minister Shehbaz Sharif, read his message on this occasion.

In her remarks, Chinese Charge d’Affaires Pang Chunxue said that China and Pakistan are close neighbors, connected by mountains and rivers, and the two countries share a future. According to her, under the strategic guidance of the leaders of our two countries, China-Pakistan relations have continued to develop.

She said China always considers its relations with Pakistan a priority.

She said that we will implement the consensus reached by the leaders of our two countries to strengthen cooperation in the fields of trade, investment, agriculture, science and technology, culture and education ; and help Pakistan accelerate its industrialization.

Referring to the recent terrorist attack near the Confucius Institute at the University of Karachi, the Chinese charge d’affaires said any attempt to undermine China-Pakistan friendship and cooperation is bound to fail. She said the Confucius Institute will continue to teach Chinese to Pakistani students through various means. She said that the hearts of our two peoples will come together.

To celebrate the 71st anniversary of the establishment of diplomatic relations between Pakistan and China, Information Minister, Chinese Chargé d’Affaires and Secretary for Information and Broadcasting Shahera Shahid cut the cake. The minister also recorded her impressions in the guestbook.