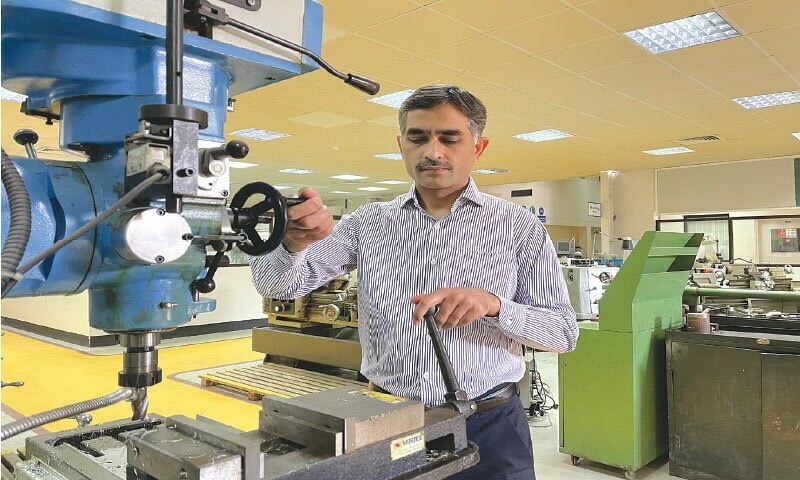 Scientific contributions and scientific breakthroughs are often cited as having changed our lives. However, Pakistani scientist Dr Ghulam Hussain, who was on Stanford University’s prestigious list of the top two percent of scientists in different disciplines last December, believes it was his parents’ contributions that transformed his life.

“They are a role model for rural parents,” says Dr. Hussain. “My father is not educated, but he cultivated my interest in science. Despite meager resources, he made huge sacrifices to provide me with the perfect environment to study. He encouraged me to explore and always lifted my spirits.

The Stanford University ranking is based on a database of more than 8 million active scientists worldwide.

For the past seven years, Hussain has been associated with Ghulam Ishaq Khan Institute of Engineering Science and Technology, Khyber Pakhtunkhwa as a Professor of Mechanical Engineering. The son of a retired soldier from Burewala, Punjab, Dr Hussain believes that the interest and guidance of parents is essential in the education of their children, especially in rural areas, where there is no not much educational culture.

Dr. Ghulam Hussain was recently named in a Stanford University ranking as one of the top two percent of most cited scientists in the world. The story of his life is also inspiring in itself

“My FSc days were the hardest, but my mother did her best to make things comfortable for me. I would leave at sunrise on the only bus that arrived in my village, Chak 483/EB, to my college in Burewala town I used to walk two kilometers and then get on the bus, when I came back in the evening, if the bus was late, I started to study because I didn’t want to waste time .

“The elderly had seats on the bus, so even standing up, I mentally reviewed the day’s work. It’s impossible to achieve anything without hard work, and time management is crucial to success.

“When I was doing my FSc, the village elders would ask me what I would do if I was not admitted to UET,” shares Dr Hussain, explaining the importance of being fully committed to one’s life purpose. “I would tell them I would try again and again. Now it’s recovery time, and I want to create a social support center in Burewala.

Specializing in advanced manufacturing processes, Dr. Hussain has edited three books and published over 106 research articles in international journals. A leading researcher in his field since 2014, he was ranked the sixth best young national researcher in the engineering category by the Pakistan Council for Science and Technology in 2017, and the world’s fourth best researcher in incremental sheet formation in 2022, according to the Scopus database.

“I chose mechanical fabrication for my doctorate,” he says, “because it always intrigued me. A strong and dynamic manufacturing sector is essential for high value-added sectors of the economy. Manufacturing and technological breakthroughs are key drivers of sustained economic growth in the United States, Germany, Japan, the United Kingdom, Malaysia and China – countries that control global bulk production.

Dr. Hussain wants to instill a spirit of competitiveness in the Pakistani manufacturing sector, to bring it up to international standards.

“I want to push indigenization and establish a research center, so that scientific knowledge can be used to provide solutions to the problems of local industry,” he says.

His work on innovative and emerging processes helps reduce pollution and costs, enables energy conservation and the use of natural resources. “My research is useful for the local manufacturing sector, particularly in the automotive, aeronautical and aerospace fields,” explains Dr. Hussain.

Talking about how his teachers influenced his life and work ethic, he shared some endearing stories.

“We didn’t have desks in our school and we used to sit on a mat. But he made us sit on the floor or on the floor, and when we asked him why he was doing that, he said he wanted us to be humble. He would say it’s the earth, which makes a plant out of a seedling, and that’s the earth that we eventually get into. When I grew up and thought about it, it made a lot of sense.

Professor Gao Lin, a Chinese researcher at NUAA, also taught Dr. Hussain essential research methodology. “He motivated me deep down,” he shares. “Lin didn’t approve of people who just sat back and waited for an opportunity. A scientist never rests, he said, and that without hard work nothing can be accomplished.

Dr. Hussain believes that Pakistan is lagging behind in science and technology due to our insensitivity to science. “Unfortunately, administrative fields and powerful bureaucratic positions are glamorized and attract more young people.”

“Our dilemma is that we value self-interest more than the interests of the state.”

Dr. Hussain says there is no shortage of talent in Pakistan, but we lack a mechanism to utilize our skilled and talented professionals. “We need a culture of research, transparency in the recruitment process and job opportunities,” he says.

“Unfortunately, successive governments have utterly failed to create an enabling environment and bureaucracy has damaged the intellectual prowess of skilled professionals, leading to brain drain and depriving the country of brilliant intellectuals. The Higher Education Commission should increase funds and support researchers in the development of indigenous technology.

Pakistan needs research that enables teachers and students to play their part in its economic growth.

“Quality education and research are key to unlocking many locks,” he says. “If we fail to do that today, the future will be bleak.”

The writer is a journalist based at KP. His areas of interest are South Asian affairs and Afghanistan.

The Prime Minister will deliver a webinar on economic growth tomorrow