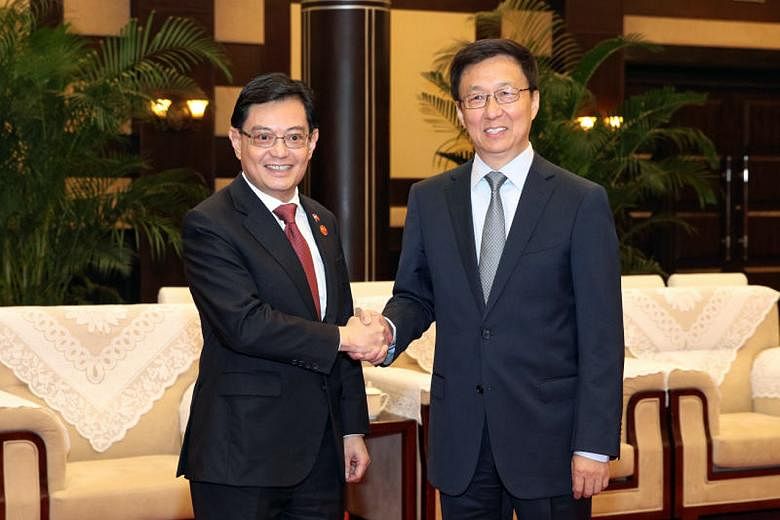 On the one hand, Singapore can help better connect the East Asian giant to Southeast Asian markets, especially with changing global trade flows and supply chains.

Heng made the remarks in an op-ed published in the Chinese-language newspaper Lianhe Zaobao on Tuesday, December 28, as he provided an update on bilateral cooperation ahead of his virtual meeting with his Chinese counterpart Han Zheng on Wednesday.

The two leaders, along with other ministers, will discuss new areas on which to work together at the annual summit of the Joint Council for Bilateral Cooperation, the highest-level cooperation forum now in its 17th year.

The project, launched in 2015, not only focuses on how goods are physically moved from China to the region, but also how the process can be faster and smoother, by speeding up customs clearance, documentation and trade finance, all of which are done digitally.

As the world grappled with disruptions to the global supply chain caused by the Covid-19 pandemic, the flow of goods along the corridor in the first half of this year increased by 35% compared to the same period last year.

In the editorial, Heng also highlighted digital connectivity and sustainable development as having significant potential for collaboration.

China’s digital economy contributing to a third of its gross domestic product and Southeast Asia’s rapidly growing digital economy which could reach US $ 300 billion (S $ 407 billion) by 2025, cooperation in this area will benefit businesses on both sides, Heng said.

He cited digital commerce activities that include blockchain solutions, which could help secure cross-border transactions and lower costs for companies operating in the two countries.

“Sustainable development is a key priority not only for Singapore and China, but for every nation,” he wrote.