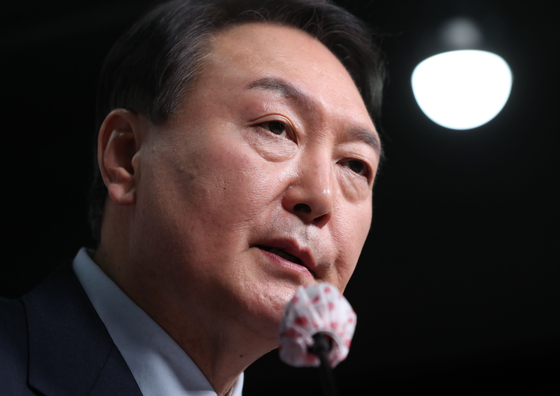 Yoon Suk-yeol is the first president in more than two decades to begin his term in the face of an economic crisis.

When he assumed the presidency on Tuesday, he became the leader of a Korea navigating the triple threat of inflation, rising interest rates and a falling won.

The odds are against the economy. As in most countries, it’s on the razor’s edge between overheating and lockdown as the pandemic winds down and the fiscal and monetary chickens of the crisis return home to roost.

Ending the era of free money without wrecking the economy will be a tricky maneuver. The central bank has already started to tighten, and although the new governor has said the increases will be paced and perhaps slightly lower than those of the US Federal Reserve, the punch bowl is slowly being removed.

Against the backdrop of more expensive money, the new government is trying to keep the economy whole and growing with a combination of strong support and sweeping reforms in the pro-business, anti-interventionist and deregulatory direction.

Depending on the execution, the government and the bank could work at cross purposes or expertly engineer the most difficult of soft landings.

The new president is in some ways an unknown. As a political newbie, he has no public service background, and Yoon is not an academic with a publication history to fathom.

During his career as a prosecutor, he gained a reputation for being ruthlessly professional and jumping into the fray without regard to politics.

Yoon has been implicated in the indictments of two conservative presidents – Lee Myung-bak and Park Geun-hye – and major business figures, and was chosen by Moon Jae-in to be chief prosecutor in Seoul and lead the campaign to eradicate “the evils of the past.” He also went after Cho Kuk, a former justice minister under Moon.

In international affairs, he clearly breaks with his predecessor with a direct, pro-American foreign policy, hard on North Korea and China and an action plan to mend the fences with Japan.

Economic policies suggest a certain inertia. Yoon promised to “fully compensate” all small businesses for losses incurred during the pandemic and mentioned a supplementary budget of 50 trillion won ($39 billion), the largest ever.

His list of 110 initiatives published a week before the inauguration further muddles the waters. Its vague and silly prescriptions are reminiscent of the previous administration, as is the 209 trillion won price tag and heavy dose of industrial policy.

The document relied heavily on free market principles and promised decisive change, with the transition team emphasizing that the economy will be private sector-led and that the new government will push for regulatory and governance reform. taxation. Moon’s many moves to straighten out the real estate market, which only ended up hurting it, were cited as turnaround priorities.

The few comments Yoon has made about his economic beliefs point to strong conservative leanings. When he was named top prosecutor in 2019, he listed Milton Friedman’s “Free to Choose” as the book that influenced him the most.

“We will adhere to market principles,” Yoon said earlier this year. “In order to overcome chronic low growth, our economy must shift from a government-centric to a private-sector-centric approach.

The economy will grow thanks to the creativity of the private sector and the efficiency of the market,” he added.

Shortly after winning the election, Yoon met with the leaders of six business lobbies, including those of the Federation of Korean Industries (FKI). The FKI was shunned by the Moon government because it was considered too close to the chaebol. The Korea Chamber of Commerce and Industry was favoured.

During his campaign, Yoon carefully stitched together liberal capitalist principles with statist sentiments, arguing that without growth, well-being is not possible. He signaled flexibility in achieving his goals, that he will not allow theory to get in the way of results.

Yoon’s cabinet choices reflect the new president’s emphasis on a market economy. They also support the idea that his administration will be as pragmatic as it is ideological.

They have experience in commerce, financial policies and budgets. The Moon administration was full of scholars and professional politicians.

“Regulations that impede business activity will be lifted boldly, while new growth engines that support innovation in new industries will be created,” Han said. “As someone who has worked in both the public and private sectors, I know very well the pain that people and businesses feel on the brink of life and death due to lack of jobs, housing instability, polarization, excessive and irrational regulation and the uncertain international situation.”

“Income-led growth wasn’t supposed to be just about raising the minimum wage,” Han said. “Companies will have no choice but to downsize if they cannot afford the higher costs.”

The prime minister was Blue House economic secretary under the leftist Kim Dae-jung administration and served as finance minister and then prime minister under liberal Roh Moo-hyun, when Moon was chief of staff.

Han orchestrated the free trade agreement with the United States, which was ratified under the Lee Myung-bak administration. He recently stressed Korea’s need to join the Japan-led Comprehensive and Progressive Trans-Pacific Partnership Agreement, pointing out that Korea would lose a lot if it did not sign.
.
Finance Minister Choo made comments indicating a market-oriented stance.

“So far, the centerpiece of the government’s economic measures has been fiscal spending,” Choo said after his appointment. “Revitalizing and strengthening the economy must be centered on the private sector and businesses.”

He added that the most important goal should be to help businesses actively create jobs and increase investment.

“Fiscal spending cannot be ignored to tackle the economy,” Choo said. “But instead of the government leading the revitalization, it should be the private sector. Tax expenditures should be more focused on protecting the public and helping the vulnerable.”

Choo, who has worked in finance, as a lawmaker released a bill that would reduce the top corporate tax from 25% to 20%.

Yoon emphasized that he intended to delegate responsibility.

“All authority will be vested in each minister,” Yoon said during the presidential race in January. “However, ministers will be fully responsible.” 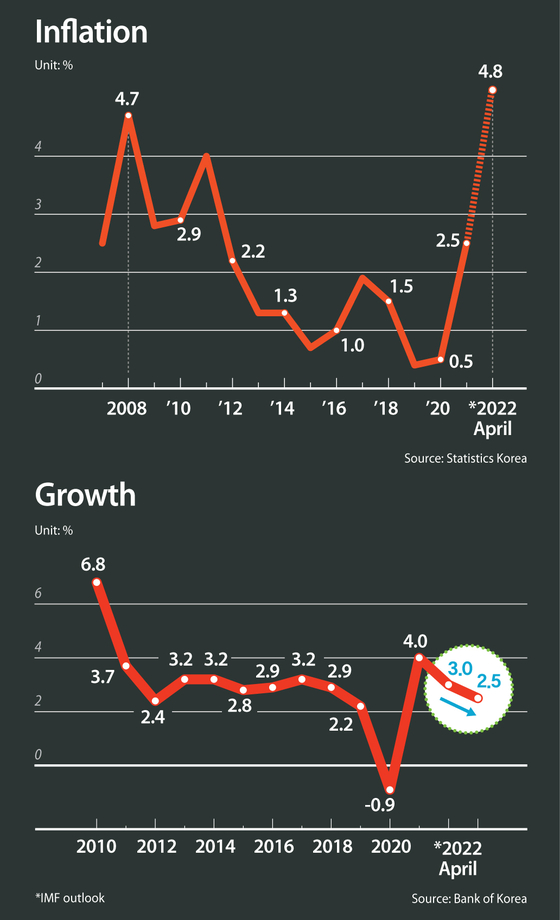 Inflation is soaring globally and in Korea due to years of loose monetary policy and the war in Ukraine.

In April, consumer prices rose 4.8% year on year, and the International Monetary Fund expects the full year figure to be around 4.0%.

In financial markets, the Kospi is down about 20% from the peak, while Samsung Electronics, the country’s largest company, is down 23% from its peak.

The won is trading at a 2-year low.

“If inflation continues to rise, real purchasing power could be weakened,” said Oh Hyoung-seok, head of the Bank of Korea’s monetary and credit policy research team. “When interest rates are raised to stabilize inflation, the negative effects on the economy may increase.”

Yoon is focused on mitigating the effects of rate hikes on Koreans.

“Even if higher interest rates are inevitable, we should review plans that could minimize their impact on the most vulnerable,” Yoon said April 15. “Signs of a complex economic crisis abound.”

The central bank is under pressure to raise rates for the fifth time in the current tightening cycle. It has raised the base rate by half a percent to 1.5 percent since August last year. Two more rate increases are planned this year, bringing the base rate to 2%.

Bank of Korea Governor Rhee Chang-yong recently said that while inflation and slowing growth are equally worrying, he is putting more emphasis on inflation.

The Yoon government has no plans to backtrack on the promised extra budget, citing the struggles and sacrifices of small businesses.

“At this stage, we cannot fail to make a supplementary budget,” Finance Minister Choo said. “As much as we need to restrain consumer prices, we will find a way to maximize fiscal and monetary policy, including reducing the size of the budget.”

The government is ready to cut the budget from the initial 50 trillion won to 30-35 trillion won given its effect on inflation, but it could still be close to record highs.

The Yoon government says it will not rely on debt to finance additional spending, but will raise funds by restructuring the budget.

“The new Yoon government is entering its first year with a mess created by the previous administration,” said Lee In-ho, an economics professor at Seoul National University, pointing out how under the Moon government, the debt-to- Government GDP fell from about 40 percent to 50 percent.

“The Yoon government needs to carefully address the policy balance between supporting small businesses, which have been pushed to their limits over the past two and a half years, while controlling inflation,” Lee added.

“Without the extra budget, these small businesses will be wiped out and it will be difficult for them to recover,” Lee said. “But the budget must be spent efficiently in the areas where it is really needed and managed prudently and must be temporary in order to minimize inflation.”

“The quality of life between Samoa and Ireland is radically different”