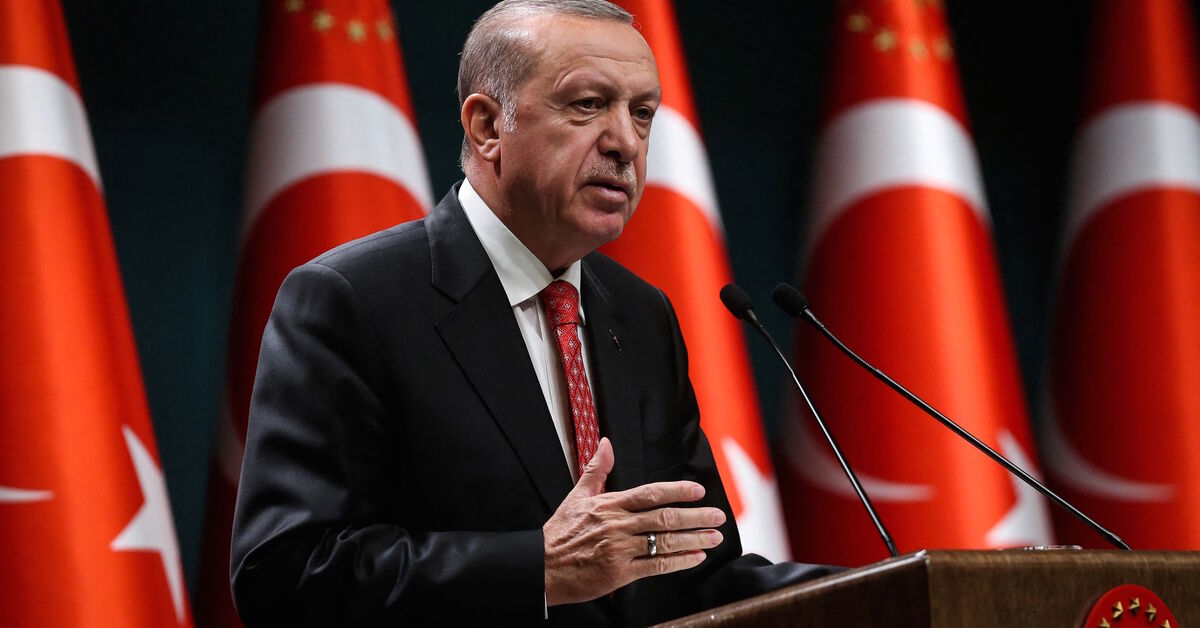 ISTANBUL — Turkish President Recep Tayyip Erdogan has ratcheted up the pressure on the opposition this week with veiled threats of street clashes in response to protests against his rule.

Facing an election at some point in the next 18 months, coupled with the worst economic crisis of his nearly 20-year reign, the president is seeking to neutralize the threat from an opposition that appears well placed to challenge him, according to the analysts.

“Supposedly, they will take to the streets without any shame,” Erdogan said in a televised address to members of his ruling Justice and Development Party (AKP) in Ankara on Tuesday.

Referring to the 2016 coup attempt against him which saw his supporters clash with rogue military elements and left more than 250 dead, he added: “Wherever you go, this nation will teach you a lesson just like she taught a lesson to those who took to the streets on July 15.

This week’s announcement of 36.1% inflation – although independent economists say it could reach 83% – illustrated Turkey’s economic problems. The lira lost 44% of its value against the US dollar last year as unemployment remains in double digits.

The crisis has seen protests in major cities and a dizzying carousel of layoffs and new appointments at the finance ministry and central bank.

It’s not just potential protesters that Erdogan and his allies are seeking to counterbalance ahead of a possible snap election.

CHP’s Ekrem Imamoglu has emerged from obscurity to be seen as a potential rival in the presidential race after becoming mayor of Istanbul in 2019.

Devlet Bahceli, leader of the Nationalist Movement Party (MHP), an AKP alliance partner, on Tuesday called for Imamoglu’s removal if links between Istanbul municipal staff and terrorist groups are proven.

The Interior Ministry on December 26 launched an investigation into more than 550 employees of the Istanbul Metropolitan Municipality over alleged links to a number of terrorist organizations.

The call echoes attacks on the Peoples’ Democratic Party (HDP), which is part of Turkey’s broader Kurdish movement and is the third largest party in parliament after the AKP and CHP.

The HDP has seen dozens of its elected mayors removed and replaced by government-appointed trustees over alleged links to terrorism since 2019. The party also faces a legal bid to shut it down.

“The opposition parties engaged in strong coordination in their electoral alliance, which survived, and that’s no small feat,” said Berk Esen, assistant professor of political science at Istanbul Sabanci University.

“They have done a good job promoting this idea of ​​transitioning to a strengthened parliamentary system and have engaged in extensive discussions to develop a proposal. They have also done a good job traveling the country, challenging the government and trying to reach out to voters.

Following a violent disturbance involving members of the MHP in November, Bahceli warned Yavas that “the breath of the gray wolves is now on his back”. The Gray Wolves are a far-right group linked to the MHP that has long been associated with political violence and murder.

Yavas and Imamoglu have both voted favorably against Erdogan in recent months. A survey published by MetroPOLL this week showed that they are the two “friendliest” politicians in Turkey, Erdogan being relegated to fourth place.

Meanwhile, prosecutors have also submitted documents to revoke the immunity of 28 opposition members of parliament, most of them from the HDP, NTV broadcaster reported on Tuesday.

Turkey has imprisoned several parliamentarians in recent years. The MPs, mostly from the HDP, have generally been jailed on terrorism charges related to historic speeches interpreted as supporting the Kurdistan Workers’ Party, which is listed as a terrorist organization by the US and EU as well than by Turkey.

Meanwhile, Erdogan appears to be weighing his timetable for the upcoming elections.

“I suspect that in six months the economic situation will be much worse,” Esen said. “It’s in his interest to have a snap election, but I don’t know if he has the support to win, which for a rational politician would mean no snap election.”

He added: “He regularly consults the opinion polls, trying to find the most opportune moment for an early election. It could be in three months, six months or much later. It all depends on how the opinion polls show it.