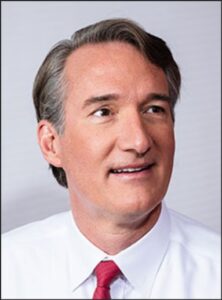 by James A. Bacon

Virginia’s economy has grown slowly at 0.9% per year for the past eight years, said Governor-elect Glenn Youngkin, and he wants to “really grow” at a standardized rate of 2.5%. . To achieve this goal he says Business Virginia magazine, it proposes to do three things: (1) reduce taxes, (2) reduce the cost of living, and (3) reduce regulation.

In practical terms, that includes not shutting down the economy with COVID-19 lockdowns and closures. It means keeping schools open. And that means that no vaccine is mandatory.

Said Youngkin: “The decrees that require state employees to be vaccinated and wear a mask, or a decree that makes children [in] K-12 must wear a mask – we will work with [the new commissioner of health and new Board of Health] to undo that.

While Youngkin says he wants to offer Virginians tax relief, he doesn’t look like a small Tory government. Citing the link between K-12 education and workforce development, he touts his plans for “the largest education budget in Virginia history” – over money for teachers’ salaries, for school facilities and to fund special education programs. The governor-elect also wants to expand mental health programs, high-speed internet access across Virginia, and spending on law enforcement.

Other than tax cuts, Youngkin’s spending priorities don’t differ much from those of incumbent Governor Ralph Northam. But the tone of the incoming administration will be radically different. While Northam’s austere rhetoric of social justice emphasized statistical disparities, racial injustice, and racial inequality, Youngkin adopted a rhetoric of expediency and improvement. Better jobs for everyone. Lower taxes and lower cost of living for all. Higher educational standards for all.

Taxes and cost of living. “One of the big issues that we are seeing in Virginia today is that we have seen the cost of living climb out of control,” Youngkin said. “We are now above the national average and Virginians are moving away faster than they are moving here from the other 48 states. “

Youngkin is the first governor of Virginia, if I recall correctly, to focus on the cost of living in his economic development strategy. It is unclear what data he relies on to support his claim of the out-of-control cost of living, but according to data from the Council for Community and Economic Research, Arlington has the 5th highest cost of living of all cities in America (although technically Arlington is a county), and Alexandria the eighth highest. The cost of housing in both towns is among the highest in the country.

In his remarks to Business VirginiaYoungkin does not address housing, the cost of which is heavily influenced by scarcity-creating zoning policies, or energy, the cost of which is determined by the Northam administration’s zero carbon goals. Rather, it checks off the components of the cost of living affected by taxes. He wants to eliminate the sales tax on groceries, double the standard state income tax deduction and shelter up to $ 40,000 in veterans retirement income. “We are witnessing a massive over-taxation of Virginians. We need to be more competitive with the states around us.

Regulations. Youngkin generally talks about “reducing the regulatory framework” that is holding back business, but provides few details in the interview other than holding the line on COVID restrictions.

“I will declare Virginia open for business and make it very clear that we are not going to have any blockages and shutdowns,” he said. “This is extremely important, because no business is going to invest in new facilities and new manufacturing and hire new employees if it thinks it is going to close next week.”

“He continues:” There [are] three main principles in which I firmly believe: n ° 1, that the vaccine is the best way to protect yourself. I got the shot, my family got the shot, but I don’t believe the government should require everyone to get the shot. Second, I don’t think people should be fired for not getting the vaccine. We absolutely can use other procedures and protocols to ensure the safety of people in addition to making the vaccine mandatory. “

Schools. Youngkin does not mention “critical race theory” or “diversity, equity and inclusion” in the interview, but he clearly intends to target one detrimental consequence of the CRT-inspired education policy: the erosion of educational standards in the name of “equity”.

“We need to restore the expectations of excellence in our schools,” he says. “It’s going to start with restoring high standards to our schools and then funding… the biggest education budget in Virginia history. However, schools need more than money. Youngkin alludes to fundamental changes. “We’re going to have a curriculum that expands our children. It is not a watered-down program.

Youngkin also intends to “aggressively advance” a new charter school program. “School choice in our public schools must be a giant part of K-12 education in the future.” However, he gives no indication of how he plans to create more charter schools. Virginia law gives local school districts, not the state government, the power to approve or deny charters.

Business investment. Virginia has the lowest labor force participation rate since records were kept, but is not vying for many big economic development opportunities, Youngkin says. “Even with some of the brand wins, we are lagging miserably behind our peers. … We are not in competition. Tennessee, North Carolina, South Carolina, George, Florida, Texas [and] even Maryland competes significantly better than us.

What is there to do? Youngkin is not talking about increasing “incentives”, which gives other states much of their competitive advantage. Rather than doing favors for individual businesses, he thinks in terms of lowering the cost of living (which affects the ability to recruit and retain workers), lower the cost of doing business, lower taxes, and lower costs. regulations.

The result of bacon. Youngkin’s priorities do not represent a radical departure from conventional wisdom, but I see two important changes. One is the emphasis on the cost of living, which has a direct impact on the quality of life. This change of perspective is promising. But to fix, Youngkin must tackle the stratospheric cost of housing, which he has not yet indicated he will do, and he must tackle the rising costs of electricity and energy, a subject that is not addressed in this interview.

The most important change is the change in rhetoric. Flogging us for the racial sins of the past, as we have been doing for four years now, does nothing to help Virginians improve their lives. In contrast, creating better jobs and better educational pathways to qualify for those jobs opens up opportunities for all.

The change in rhetoric is also making Virginia a more attractive place to do business. Who would want to invest in a state run by social justice ideologues whose biggest selling point is “Hey, we’re not as racist as we used to be”? Youngkin offers a forward-looking and optimistic vision of shared prosperity for all.